Kataherine Kosaca Kotromanic the wife of Croatian King and Ban in Bosnia, Stjepan Tomas, proclaimed blessed, a member of the Franciscan secular order. 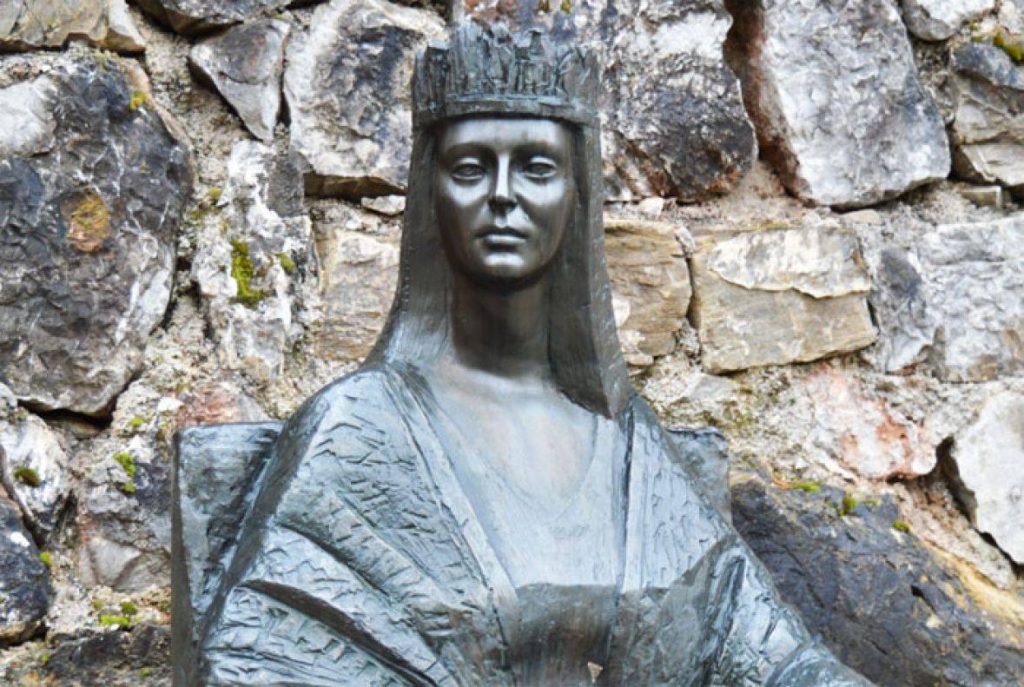 The Statue of queen Katherine

It is traditionally referred to as the last Bosnian queen in the people, although some historians attribute this role to Queen Marie (1447 – 1495), wife of Bosnian King Stjepan and daughter of Serbian despot Lazar Brankovic.

Older researchers considered Katarina the penultimate queen of Bosnia, because they considered the last Bosnian queen to be Queen Maru, the wife of the last king in Bosnia (by this interpretation) and the daughter of the Serbian despot, not Katarina, who was the wife of the penultimate Bosnian king. Katherine was the queen, or first woman in Bosnia, during her marriage to Stjepan Tomas.

Since her marriage to Tomas ended with his death in 1461, and Katherine’s stepson Stjepan Tomasevic sat on the throne, Tomasevic’s wife, Mara Brankovic, has taken over the position of queen in Bosnia (the first women of the kingdom). With Tomasevic’s death, Mara remained the widow of the last king in Bosnia, or the last queen in Bosnia.

Some contemporary researchers believe that Katherine was the last Bosnian queen. The causes of the legends about Katarina, the last Bosnian queen, have been thoroughly examined and historians believe they have succeeded in discovering the reason. Namely, after the death of her stepson, King Stjepan Tomasevic in 1463, Katarina spent the rest of her life trying to get help to rebuild the kingdom in Bosnia.

In doing so, Catherine claimed the Bosnian Kingdom, and Mary either supported or did not oppose it. In addition, Catherine brought with her into exile all the royal insignia (and the crown), which were transmitted from king to king, symbols of royal power. Both facts indicate that she embodied the last form of kingdom in Bosnia, that is, she was accordingly the last queen. For this reason, she is informally considered to be the last queen in Bosnia, although she has never been formall

There is a third interpretation that, after the fall of the Kotromanić Kingdom, the same function was assumed by Bosnia Matthias Corvinus (territory, capital, power, ecclesiastical and secular lordship and people), from which it is concluded that the Corvin dynasty actually dethroned the Kotromanic dynasty from the throne in Bosnia. stating that the Kingdom of Bosnia was recognized only in 1461 and shortly before its fall, and that all its sovereigns were considered Croat-Hungarian kings, with the fence that it refers to the part of Bosnia that controlled Corvinus after the 1463 wars.

This view is known to many Bosnian queens in the time of Catherine, the aforementioned Mara, then Beatric Aragon, the wife of Matija Korvin, and the anonymous wife of the Bosnian kings Nikola Ilokki, Matija Radivojevic and Matija Vojsalić. According to this interpretation, Katherine is sixth in the year of taking the throne from the end of the queens in Bosnia, while in the year of the death of each queen she is not the last, since Mara was last mentioned in documents in 1495 and Beatrice Aragonska died in 1508.